This is a reprint (with a small prologue and addendum) of an article I wrote for a previous publication which I feel is particularly appropriate as a response to some of the speculation in the Christian blogosphere. 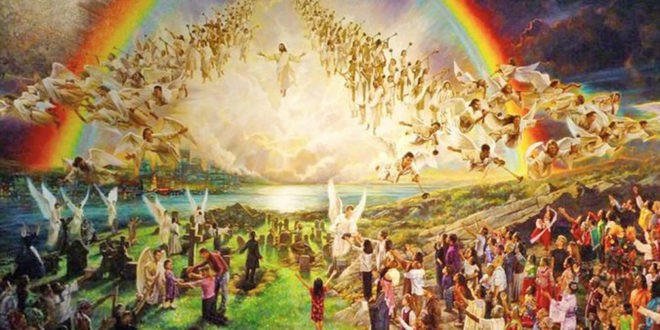 “Meeting The Lord in the Air”

It is “Rapture Time” again in the House of God, the Antichrist is making a Luciferian grab for power and is establishing the one world governmental system. Time for us to leave…it is the end of this Dispensation, it is Daniel’s 70th week time (again). This “blessed hope” of ours to be removed, meet the Lord in the air and surrender the world and everything in it to seven years of deception whilst we feast and play at the marriage supper of the Lamb…

Such is the Dispensationalists’ playbook of the End of the World as we know it and the interlude between it and the Millenium where the Earth is restored for 1000 years and we all get along great until the devil is released from prison at the end of that time, messes up the world again, finally gets chucked onto the lake of fire and we can all live happily ever after again. My scornfulness aside, it must be admitted that there are and have been some fine scholars (Walvoord, Chafer, Pentecost) who have defended Dispensationalism as an innovation of premillennialism. It cannot be denied the system has provided some genuine prophetic insights and scarcely a radical preacher will not accuse the current church of “Laodicean luke-warmedness”, a concept birthed in Dispensationalism. However, on the contrary, there are also fine scholars (Gentry, Mathison) who have objected on an exegetical basis, historians (Macpherson) that have thoroughly repudiated it as an orthodox development of premillennialism reclassifying it as a mystical, unorthodox innovation and missionologists like Cope that have repudiated it on a theological level. The latter is what I am interested here first and then the favourite “blessed hope” of the Dispensationalists, the “Rapture” doctrine. I include some references at the end for the other categories if you are interested.

Landa Cope, one of the founders of YWAM in the 1970s with Loren Cunnigham, asserts (Cope, 2011/2015) that “theologies of imminent return” have repeatedly emerged as the church began to take on its social and political Kingdom building role and have led to its premature termination and surrender of culture to the secular humanists with disastrous consequences for culture as a whole. She views Hal Lindsey’s The Late Great Planet Earth as “the one for our generation” as the evangelical church began to emerge in the 1970s from over 50 years of self-imposed cultural ghettoism to asserting itself again in the cultural sphere. She continues Peter and Paul expected return in their lifetimes and every Christian generation since has had those who adopted a similar position. In her words, we must build the kingdom and not worry about the return for Jesus told us not to, just to “occupy until he comes”[1] and be ready to give an account of our works (Luke 19:13–27). In my words, it should not distract us from exercising dominion and subduing the Earth to God’s law. To bastardise Vernon McGee’s dispensationalist quip “you don’t polish brass on a sinking ship”, I say “let us get an army of marine maintenance men and women if it helps the ship stay seaworthy”.

Now the second issue I would like to consider is the illogical nature of the favourite doctrine of classical Dispensationalism, “the Rapture”. The valley of decision for the Rapture was 1988 and its final burial, if there had been any lingering doubts, should have been 2007. The two dates featured prominently in the Dispensationalist’s calendar for sound prophetic reasoning. 1948 was the foundation of the state of Israel, ‘the budding of the fig tree’ (Matt 24: 32–34) and 40 years is a generation of Israel. Edgar C Whisenant allegedly sold 6 million copies of “88 Reasons why the rapture is in 1988”[2] basing his logic on detailed mathematical calculations and prophetic principles and his failure did not discourage him from predicting 1989, 1990 and 1991. For some, it could be delayed until 2007 for 1967 was the first time that Jerusalem was in the hands of the Jews for two thousand years, clearly a prophetic marker of some kind for anyone with true prophetic discernment (obviously). However, these passed as did the apocalypses predicted by the pagan astrologers with the unusual and rare alignment of all nine planets at around the same time.

I have in my collection recordings from the late 1980s of otherwise rational and sane preachers I would happily recommend thoroughly convinced the rapture was days away and audiences shrieking in ecstasy. One friend of mine believed a minor earthquake that occurred in North Wales in 1990 was the “trumpet call” in Revelation — he sold his profitable and successful business and waited to be caught up! His sad spiritual story since, despite his enormous intelligence is a lesson for any believer. Yet, he simply with a greater degree of conviction believed and acted on a lot of the traditional teaching in British Pentecostalism that I too had received and been sincerely taught.

However, Dispensationalism and its predilection for predictions and “signs of the times” has somehow survived. In the last few years, planetary convergences, comets and consecutive “blood moons” on Passover/Jubilees that have not occurred for millennia have all been posited as signs of the End and our imminent removal by otherwise sane and competent ministries. Unless I missed something, nothing of note has happened, except the sale of lots of DVDs and MP3s of their “prophetic packages for (mis-)understanding the End Times” — but I hasten to add, I could have missed whatever was supposed to have happened. There has always been a tendency amongst dispensationalists to “special revelation” (Macpherson (2000), pp.55ff) and prophetic insight concealed from the rest of the “Moabite evangelicals” (MacPherson (2000), p.85).

Remarkably there are still able scholars committed to the view who are able to maintain a critical view of the failures of their forerunners as “rapturists” or suffering from “rapture mania”. One such able scholar is Chuck Missler (2014), who I thoroughly recommend on every subject. However, it is notable in his latest work there is no mention of the ‘budding fig tree’ as the reformation of Israel. According to his latest position, the marker for the 40 years and the last generation is the rapture itself. In other words, he has foreclosed the issue of trying to predict the date in any specific way though he was still comfortable predicting it was “possible within the next 12 months” though that was during the otherwise excellent 2011 Strategic Perspectives conference. He separates previously dispensationalist harmonised “end time” passages between Luke and Matthew into pre and post tribulation events, posits specific psalms as additional sequences of prophetic events that have previously been “missed” (Psalm 89 — see his “Perilous Times” and “Planet in Jeopardy” series) and separates pre and post restoration events. This increasing granularity in dealing with the text to extend the prophetic timeframe is befitting to the resilience of the position against all the odds after 1988.

So, when you see a high-profile, worldwide, miracle-working, preaching Church no longer the joke of contemporary culture, know that the end is near.

Notwithstanding this attempted academic reorientation of Dispensationalism, there is still a huge appetite for Rapturist psychological escapism bred by it if the “Left Behind” series is anything to go by. I contend there is clearly something seriously amiss with such an attitude of a Christian with regards to their educational, social and political responsibility. It is about as far from the Reformation call of Luther and Calvin to redeem society and establish godly secular states as one could get and these teachings should now be in disrepute. I believe it is a sign of maturity in the believer to take their place as heavenly ambassador in an earthly kingdom by fully engaging with their social responsibility and not retreating into mysticism even when dressed up as the fashionable prophetic lingo “God’s government in the heavenlies” or “we are God’s government in session this evening”. Let us think clearly and build the kingdom on Earth and within our vocations without distraction or condemnation that we are being “worldly”.

So, what do we make of Novel Coronavirus COVID-19 as a prophetic sign? I am writing in detail on that as we speak but I will paste this from a recent newsletter I received:

“Brother Copeland, is the COVID-19 virus some kind of judgment?”
I’ll answer that with the words of Jesus in Matthew 24:6–7:

6. And ye shall hear of wars and rumours of wars: see that ye be not troubled: for all these things must come to pass, but the end is not yet.

7. For nation shall rise against nation, and kingdom against kingdom: and there shall be famines, and pestilences, and earthquakes, in divers places.

The Greek word translated pestilence is also translated plague. Remember, we just witnessed a plague of locusts, earlier this year, in Africa. We’re in the last of the last days. But the good news is in what Jesus said in verse 14:

14. And this gospel of the kingdom shall be preached in all the world for a witness unto all nations, and then shall the end come.

So, when you see a high-profile, worldwide, miracle-working, preaching Church no longer the joke of contemporary culture, know that the end is near. Myself, personally, I think we have a while to go yet.

[1] The KJV uses this phrase, most modern translations would say “do business”; the verb literally refers to the business of trading and making money. The KJV translators were perhaps trying to capture the wider context of the passage where it is talking about a King and his subjects, “occupy till I come” is a military idiom referring to a King leaving his occupying force to rule in his absence. In this instance, I think the KJV translators made a good call.