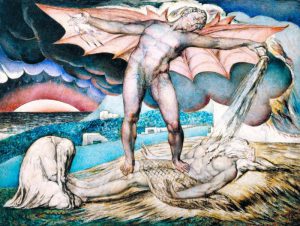 One of the biggest questions we can ever ask as Christians is who is behind a catastrophic world event like COVID-19, is it a judgment of God or an attack of Satan? In a world full of diverse voices and contradictory “prophets”, only scripture can provide that answer and this article uses two pieces of scripture to nail the coffin shut that you might never have to ask that question again.

For me, the “plumb lines” of scripture are many but I want to consider John 10:10 and briefly visit Isaiah 54:15–17 (I only discuss the Isaiah verse in the full essay of which this is a snapshot):

NET John 10:10: The thief comes only to steal and kill and destroy; I have come so that they may have life, and may have it abundantly.

NET Isaiah 54:15–17: 15 If anyone dares to challenge you, it will not be my doing! Whoever tries to challenge you will be defeated. 16 Look, I create the craftsman, who fans the coals into a fire and forges a weapon. I create the destroyer [who devastates]. 17 No weapon forged to be used against you will succeed; you will refute everyone who tries to accuse you. This is what the LORD will do for his servants — I will vindicate them,” says the LORD.

Now, these verses have a context, and much can be said and has been said in their exegesis and applicability. However, in an unambiguous and clear way, I believe they express some very clear universal and eternal principles which should give us a general orientation towards what we are experiencing in the world today and for us not to get confused by obtuse and sophisticated prophetic inferences from extended biblical passages freshly baptised with our new Western prophetic insights. As a matter of exegetical clarity, I would immediately say that the context of John 10:10 is as a summary statement of theological arguments that have gone on for chapters and chapters and are illustrated further afterwards. It presents to us the clearest distinction between the character and purposes of God and the character and purposes of Satan in the whole of scripture.

John 10:10 is unambiguous in what is sets before us. The mood of the Greek is subjunctive, and the construction is logically emphatic negative emphasising the absolute contrast between Jesus, representing the person and character of God and the thief, representing the person and character of Satan [1] and the objects of their purposes are ourselves. What does the Satan come to do to us? To steal, to kill and to destroy. What does God come to do to us? To bring life and to have it abundantly. So, freshly armed with this principle, let us apply it directly to what confronts the world. Do we have stealing, killing and destroying in our world today as the result of the pandemic we are experiencing?

Well, our liberty has been stolen [2] on the back of poor science [3] by crooked politicians behaving like Eastern European communist dictatorships did during the height of the Cold War.

o Our rights to travel, trade freely with one another, to socialise and to meet as church congregations have all been removed with a massive and intrusive increase in police powers and the surveillance capabilities granted to government agencies.

o 342 pages of legislation that is unprecedented in peacetime was “nodded through” the British parliament that overturns all kinds of precedents that preserve our liberty and freedom.

o Data that we believed was going to be private (our cell-phone data and even our “Fitbits”) is now going to be made available so that “contact tracking” can be done [4]. The privacy controls will be easily bypassed [5] so that individuals and their location will be available to any agency.

There is plenty of killing going on, particularly of those with existing health conditions.

o It disproportionately affects the economically disadvantaged, the self-employed, urban areas with high density, close proximity housing, the elderly and those with special educational needs or care needs that are likely to be institutionalised.

o Human beings are social creatures and not all are online or will be able to remain socially stable if they are limited to online communication.

The prize, however, must go to destroying.

o Tens of millions have lost their livelihoods, work and businesses.

o Entire economies of nations have been stopped and massive borrowing by their governments is going to concentrate an enormous amount of power in a transnational financial elite [6], probably for decades to come [7].

o Abuse victims (both child and spousal) are trapped inside with their abusers.

o People’s mental health and overall sense of well-being is being compromised by unnatural and unnecessary [8] incarceration.

So, I would hope, at least on a prima facie basis anyway, we should be able to emphatically answer our basic question that the worldwide shutdown and pestilence is the work of Satan in response to the progress of the Kingdom on Earth.

So, I would hope, at least on a prima facie basis anyway, we should be able to emphatically answer our basic question that the worldwide shutdown and pestilence is the work of Satan in response to the progress of the Kingdom on Earth.

Should you want to argue further about God “permitting” it as discipline for the entire human race rather than “causing it” or as some great prophetic reset, I refer you to the full (10000 word) essay at https://www.researchgate.net/publication/340772114_COVID-19_Novel_Coronavirus_God’s_Blessing_or_Satan’s_Curse

Notes:
[1] I choose to follow the normal rule of English grammar which is to capitalise proper names. This does not imply I am providing special honour to the person of Satan or granting him equivalent rank with God.

[3] The first major contra-study has been published in the premium medical peer reviewed journal (‘the Lancet’), see https://www.bbc.co.uk/news/health-52180783 . Its conclusion was that there was no justification for closing schools (and by implication most “social distancing” and stopping the economy). It has been well-received by most experts, the notable exception being the professor who provided the report to the government that was used to lock us up. However, even he has been forced to admit that there could be “as much as a 2/3rds overlap” between people who would have died anyway and people dying from COVID-19; if the original “research” had been subject to robust peer review, we would probably have never got to lockdown.

[5] Consider, for example, data identifies subjects regularly travelling from infected area X to uninfected area Y. How long will it be before a government agency requests identification of the “anonymous” subject that is posing a risk to the general population?

[7] It may be the world economy never recovers and a new form of social organisation emerges where we are provided with a minimal State subsidy that ensures equality by imposition (a Universal Basic Income). This is already a serious policy proposal and many British labour unions have already passed resolutions at national conferences backing such schemes that “liberate” workers from bondage to work. British pressure group 38 Degrees which now has a national level voice, launched a petition at the beginning of the crisis advocating this policy.

[8] See for example: https://heated.medium.com/how-should-we-be-reacting-to-the-coronavirus-pandemic-7b3189b1097b This was written by a senior medical figure with experience of handling epidemics.