This is an abridged (no adverts!), mostly text-only version of the article that appeared in the Washington Post here. To view the Washington Post version you may need to sign-up. Where there was emphasis in the original I have endeavoured to replicate it and I have emphasised the quote with bold I included for context in the main article.

I have marked the WP version as the canonical version for this page to indicate it is duplicate content.

On Tuesday, Bill Gates released his annual letter {link broken} commenting on his foundation's work. This year's edition takes particular aim at the "three myths" that block progress for the poor: The myth that aid doesn't work, the myth that aid is wasted and the myth that aid will just lead to overpopulation. We spoke about the three myths Tuesday morning. An edited transcript of our conversation follows.

Ezra Klein: Your annual letter this year is primarily focused on the idea that foreign aid doesn’t work. Did you feel the need to write this because that idea is growing?

Bill Gates: I hope the cynicism about aid isn’t getting worse. But it’s hard to deal with because people think we’re spending 10 times as much as we are or more. You want to negotiate and tell people we’ll just spend five percent of the budget on foreign aid. They’d say, "That’s a huge cut; it would be great!” So, most people just don’t get to see what’s going on.

EK: A lot of people argue that the advances we’re seeing in recent decades have nothing to do with foreign aid. It’s all about the spread of capitalism, technology and better governance practices. How do you see it?

BG: So there was a long time when everybody was poor. Then the industrial revolution comes along. Advances in science, energy use and materials led to a situation where, by the 1900s, you have this bimodal world, which you can see in the graph we published. 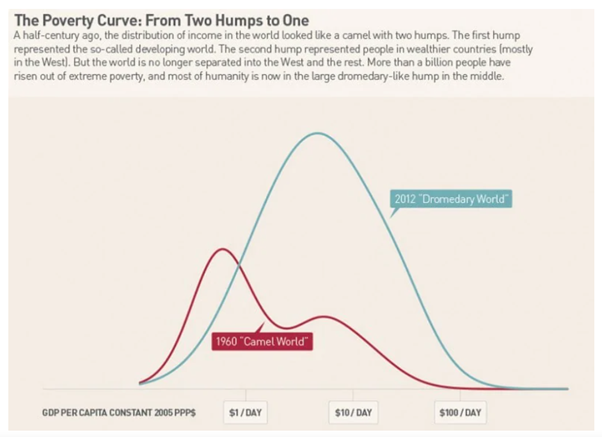 But some countries really ran out in front. It’s true in GDP, health and education. The story since the 1960s is partly the diffusion of the best practices of the U.S. and others. But we can attribute some things to foreign aid. If you would’ve died because you had AIDS and you didn’t have the right drugs, but you got them from PEPFAR -- your life was saved by aid. The increase in farming productivity, like the green revolution, that’s aid. Billions would’ve starved without aid. Measles deaths are down -- that's all aid. Smallpox eradication, that’s aid. Capitalism did not eradicate smallpox. It just doesn’t know how. Polio eradication is a work in progress, but it's not being done by markets. So the childhood death reduction, the nutrition improvements, those are overwhelmingly aid-driven.

EK: There’s been a real turn towards quantifying what we get for each dollar in aid spent in recent years, driven in large part by your organization. Are you confident we get more for our aid dollar than we did 50 years ago?

But today we’re certainly cutting child mortality faster than we ever have. We’re raising agricultural productivity faster than we ever have. We’re finally seeing reasonable economic growth in Africa. The understanding that the capitalistic system is the way to organize your economy has also been beneficial. What Deng Xiaoping did in China alone was a huge change. It brought China from being even poorer than India to a middle-income country. In Africa aid hasn’t helped as much because you have diseases like malaria lock them into a poverty trap.

EK: It sounds a bit like the model of aid you’re laying out here is one in which aid does the work of getting a society to be healthy enough and stable enough that economic and political best practices can take over.

BG: Technological advance is also a big part of it. For a disease like malaria it’s hard to overstate what a problem that is for Africa. It’s such a drain on young children there. But in 20 years, because of science and aid, if we don’t have malaria down to zero, we’ll have it down to a very tiny number. Same with diarrheal and respiratory deaths. The lack of awareness in the progress to date is amazing to me. People who are very well educated, if they just read headlines they know a lot about setbacks -- about the two percent spent corruptly -- but they don’t know anything about the progress made day by day. You’d think that people would be celebrating and talking about good news.

EK: Your letter talks a lot about the myth that aid will just lead to new problems through overpopulation. I was a bit surprised to read you focusing on it. Are fears around overpopulation an impediment in your day-to-day work?

BG: It’s a huge impediment in convincing rich-world donors that they should feel good about these health improvements. Our foundation focused in the 1990s on reproductive health. We weren’t nearly as big then. But we wanted to make conctraception available because we thought population growth would make everything so difficult, whether it’s the environment or feeding kids or stability. It was only when we found out about this phenomenal connection between improved health and reduced population growth that we felt: Great, let’s just make the foundation as big as possible to go after these health problems. Because before then the commonsense thing was more kids would make these problems less tractable.

I don’t think people like to say out loud that we want to let these kids die because there are too many of them. But by choosing not to get into health in our early days I was a victim of the myth around overpopulation. But there is just phenomenally good news here. The world’s population will peak. Now, we do have huge population growth in places where we don’t want it, like Yemen and Pakistan and parts of Africa, where we don’t have the resources to really help those people. So we need to get serious about figuring out how to make sure there’s relative health and satisfaction in those places.

EK: Usually when you hear people talk about overpopulation and Malthus today they’re arguing that population growth is fine because we innovate our way out of the problems. I’m struck that that’s not the argument you’re making here. You’re saying ceaseless population growth wouldn’t be fine, but it doesn’t actually happen, because as people get richer and healthier their birth rates decline and that that’s really what saves us.

BG: We won’t need to answer the question of how much innovation allows us to support 20 or 30 billion people on the planet. It’s possible some miracle like reinventing photosynthesis could do it. We invest in miracles like that. But the amount of innovation it would take to support 20 billion or more is pretty phenomenal and would likely not show up in time. So the fact that the population will peak is great news. We’ve already had the largest birth cohort -- the most children born in a year. We’re past the peak on that. We’ll probably only have to support 10 to 11 billion. Now we still need to raise food production and avoid climate change. And when people get richer we have to worry about things like diabetes. So I’m not saying fulfilling the development agenda makes the world all good. But in terms of injustice and equity, doubling down to finish the development agenda should be the top priority.